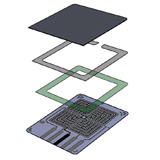 Interlink's 4-zone Force Sensing Resistor (FSR) paired with a suitable actuator can be implemented as a finger-actuated "mouse" pointing module. This pointing module provides accurate 360-degree mouse control. Users control direction by applying pressure in the direction of the desired movement and adjust speed by altering the amount of pressure on the device.

The most basic FSR consists of two membranes separated by a thin air gap. The air gap is maintained by a spacer around the edges and by the rigidity of the two membranes. One of the membranes has two sets of fingers which are interdigitated and electrically distinct; each set connects to one trace on the tail. The other membrane is coated with FSR ink. When the two layers are pressed together, the FSR ink shorts the two traces together with a resistance that depends on applied force.

The 4-zone FSR is simply a combination of four basic FSRs arranged in a North, South, East, West pattern. Each zone interpenetrates into the two zones on either side of it. This overlapping of the zones allows us to determine how much force is in each zone relative to the others. Once the relative force in each zone is known, the direction and speed of the mouse pointer can be determined.