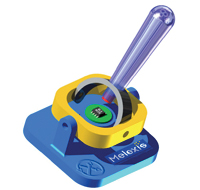 The patented Triaxis technology shows its full potential in the MLX90333 from Melexis, which is sensitive to the three components of the flux density applied to the IC (BX, BY, and BZ). This allows the MLX90333 to sense any magnet moving in its surrounding and it enables the design of novel generation of non-contacting joystick position sensors that are often required for both automotive and industrial applications (e.g. man-machine interface).

Furthermore, the capability of measuring BX, BY, and BZ allows the MLX90333 to be considered as universal non-contacting position sensor, which means that it is not limited to joystick applications. For instance, a linear travel can be sensed with the MLX90333 once included in a specific magnetic design. Two angles are computed from the three vector components of the flux density and are reported as linear output signals.