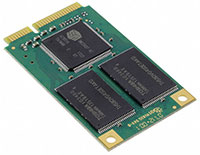 Because SSD’s have no moving parts, vibration and shock tolerance is extended significantly, making them a perfect choice for mobile applications where durability and reliability are crucial. No moving parts also remove the mechanical latencies found in traditional hard disk drives. This directly translates into faster start-up times and extremely low read and write latency times.

Temperature ranges are extended and mean time between failure (MTBF) is improved many times compared with traditional HDDs, resulting in a longer operational life of the drive. Offered in standard or industrial temperature ranges, the Swissbit 2.5" SSD is ideal for a wide range of applications in both commercial and industrial markets.