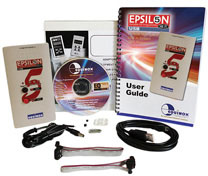 Equinox Technologies' EPSILON5-MKIV portable USB ISP programmer is the latest version of the ever-popular EPSILON5 programmer series. It is a high-speed development/field/production programmer, supporting many in-system programmable (ISP) microcontrollers from Microchip, NXP, ST, and Zensys. The programmer can be operated under PC control during development, and for project configuration/uploading using the EQTools Toolsuite. For field/production applications, the unit is designed to operate in 'Standalone Mode'. A 'Programming Project' can be recalled from the on-board non-volatile FLASH memory and programmed into a Target System by pressing a single key. All the popular ISP headers are catered for including the new JTAG ISP Port required for fast programming of the Microchip ATmega AVR and ARM families.