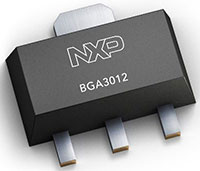 The NXP Semiconductors BGA3012, BGA3015, and BGA3018 are extreme-broadband amplifiers that deliver 12, 15, and 18 dB of gain from 40 MHz to 1006 MHz, while providing outstanding linearity performance. These amplifiers can also be used as a return path amplifier from 5 MHz to 300 MHz, or in a combined TV and satellite system from 40 MHz to 2600 MHz. At the low end of the frequency band, these amplifiers outperform competitors’ GaAs devices in noise figure performance by 5 dB and in input power rating by more than 14 dB, while offering a superior ESD rating of 2 kV and a larger supply voltage operating range of 5 V to 8 V. These amplifiers are well suited for various broadband TV distribution system applications, such as FFTH, home gateways and set-top boxes. Overall, the BGA301x are a good fit for applications requiring robust amplifiers with good gain, noise and linearity performances.