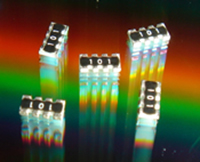 Stackpole Electronics' RAVF series includes thick-film chip resistor arrays. Chip arrays are an excellent way to downsize circuitry where many of the same resistance value and size reside on a PCB. In addition, chip arrays offer better tolerance and TCR tracking compared to discrete chip resistors, due to uniformity of materials and processes on a given part. Chip arrays allow design engineers reduce the size and weight of any design as well as providing more resistors with fewer parts to order, stock, and place. The RAVF164D offers the best economy in resistors when total acquisition and placement costs are included.

The RAVF is available in 8 pin 0603 by 4 and 0402 by 4 versions, in 5% tolerances and 200 ppm TCR. This series has the resistance value ranges and electrical performance that is well known for thick film technology. Both sizes offer power ratings of 0.063 W per element and 0.25 W per package.

The RAVF is an ideal, inexpensive, surface-mount replacement for leaded thru-hole resistor networks. Applications for chip resistor arrays vary almost as widely as those for standard thick-film chip resistors. Additionally, chip arrays are a popular choice for pull-up and pull-down for logic gates, communication data lines, and current limiting resistors for memory modules. They are regularly used in many types of computers and computer peripherals, network communications such as servers, as well as portable testers and network analyzers.