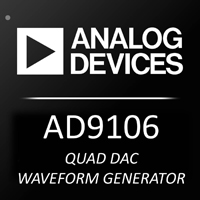 Analog Devices' AD9106/AD9102 TxDAC® and waveform generator from Analog Devices is a high-performance quad DAC integrating on-chip pattern memory for complex waveform generation with a direct digital synthesizer (DDS). The DDS is a 12- and 14-bit output, up to 180 MHz master clock sine-wave generator with a 24-bit tuning word, allowing 10.8 Hz/LSB frequency resolution. The DDS has a single-frequency output for all four DACs and independent programmable phase shift outputs for each of the four DACs.

SRAM data can include directly generated stored waveforms, amplitude modulation patterns applied to DDS outputs, or DDS frequency tuning words. An internal pattern control state machine allows the user to program the pattern period for all four DACs, as well as the start delay within the pattern period for the signal output on each DAC channel.

An SPI interface is used to configure the digital waveform generator and load patterns into the SRAM. There are gain adjustment factors and offset adjustments applied to the digital signals on their way into the four DACs.

The AD9106 offers exceptional AC and DC performance and supports DAC sampling rates up to 180 MSPS. The flexible power supply operating range of 1.8 V to 3.3 V and low-power dissipation of the AD9106 make it well-suited for portable and low-power applications.