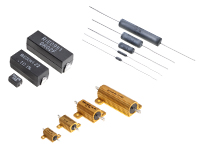 Riedon’s wirewound resistors, with their high-power rating and high-temperature rating, are also easy to customize. Like every component, the fabrication technology used in resistor manufacture has changed over time, and resistive films have made a significant contribution in allowing the cost-effective mass production of devices that are increasingly miniaturized. Yet the traditional wirewound resistor, despite a substantial decline in the number of manufacturers of this component in recent decades, remains the best solution for many specialized applications.

One reason for the survival of wirewound resistors is that all of the alternative fabrication techniques have drawbacks. For example, the use of conductive inks to produce carbon film, or thick-film resistors can produce very-low-cost components; but the resulting devices have limited pulse handling, no better than 0.1% initial tolerance and poor long-term stability, typically 500 to 1,000 ppm/year. The resistance is temperature dependent, with a temperature coefficient of resistance (TCR) of around 50 to 100 ppm/°C. Moreover, relatively-high-current noise of -18 dB to -10 dB is typical, where: dB = 20 x log (noise voltage [in μV]/DC voltage [in V]).