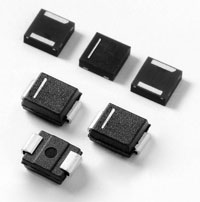 Littelfuse's PLEDxUx unidirectional series open LED protector provides a switching electronic shunt path when one LED in a string fails as an open circuit. PLED devices are connected in parallel with each LED in a series string. If one LED fails as an open circuit, the PLED connected to it turns on and carries the current that would have gone through the failed LED, so the remainder of the string continues to function. LEDs cannot withstand voltages of reverse polarity; the PLEDxUX series provides reverse battery / power polarity protection for greater LED reliability.