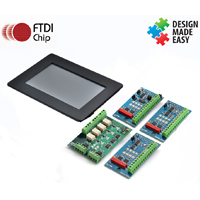 The Arduino-compatible VM800P ‘PLUS boards’ from Bridgetek/FTDI are based on the company’s award-winning FT800 EVE graphic controller devices, in which display, audio and touch functionality are all integrated onto a single chip. The boards also incorporate an 8-bit ATMEGA microcontroller unit (MCU) and a TFT display (with 3.5, 4.3 and 5.0 inch sizes available). The six new daughter cards will allow the expansion of the boards’ I/O capabilities in order to be implemented into a wider range of application scenarios. They use 1 or 2 Micro-Match miniature connectors to interface with a VM800P.

The VI800A-TTLU is a plug-in accessory for the VM800P ‘PLUS boards’ which enables inclusion of a TTL level UART. This daughter card behaves as an SPI-to-UART bridging mechanism. It is complemented by the VI800A-RELAY, which effectively acts as an SPI-to-relay bridge for PLUS boards, with the SPI slave interface converted into a relay interface. The VI800A-ETH allows an external Ethernet interface to be connected and the VI800A-POE enables Power-over-Ethernet (PoE) functionality to be benefitted from. The VI800A-N485U behaves as a SPI-to-RS485 bridge with the VI800A-232U behaving as an SPI-to-RS232 bridge – thereby allowing interfacing with legacy equipment.