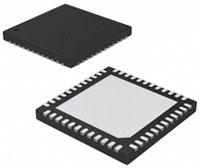 The IS31FL373x family of matrix LED drivers integrates many advanced features such as a configurable matrix (row/column) architecture, pre-programmed lighting effect functions, individual LED control registers, individual LED open/short fault detection, and device cascading with synchronization, all accessible via a fast 1 MHz I2C compatible bus interface. Each LED has its own corresponding control and fault status register to provide individual LED lighting effects, de-ghosting, and fault reporting for enhanced overall system performance and reliability. LED matrix architectures typically experience a "ghosting effect" where an LED remains dimly ON due to a residual charge in the LED array matrix. The IS31FL373x family eliminates this residual charge and therefore the ghosting effect. In addition, LEDs can fail to turn ON due to an LED open or short condition without the knowledge of the system. The IS31FL373x family detects the failed LED condition, stores this in the open-short registers, and generates an interrupt to notify the system of the location of the failed LED within the array.

The signals required to support 192, 144, or 96 LEDs are driven in a row/column multiplexed architecture which reduces device package size while resulting in fewer traces and minimal PCB area. The added advantage of driving LEDs in this row/column configuration is that no LED will ever be reverse-biased at any time, thereby improving LED longevity. For applications requiring a huge array of LEDs, up to eight IS31FL373x devices can be cascaded and synchronized without additional external components.