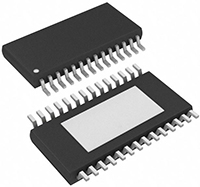 LTC’s LT3965/LT3965-1 is an LED bypass switching device for dimming individual LEDs in a string using a common current source. The device features eight individually controlled floating source 17 V / 330 mΩ NMOS switches. The eight switches can be connected in parallel and/or in series to bypass current around one or more LEDs in a string. The LT3965 is initialized with all switches off (LEDs on), and the LT3965-1 initialized with all switches on (LEDs off). The LT3965/LT3965-1 uses the I2C serial interface to communicate with the microcontroller. Each of the eight channels can be independently programmed to bypass the LED string in constant on or off, or PWM dimming with or without fade transition. Using the fade option provides 11-bit resolution logarithmic transition between PWM dimming states. The LT3965/LT3965-1 provides an internal clock generator and also supports external clock source for PWM dimming. The device is available in a 28-lead TSSOP package which has a temperature range of -40°C to +125°C (TJ). The LT3965/LT3965-1 is perfect for LED applications found in automobiles, cameras, and displays.