Connector Headers and Ejectors for CFast™ 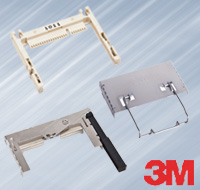 3M offers optional left or right button dual-push ejectors that provide a balanced force against the card for even and smooth card removal. Another option for the CFast headers from 3M is the latching retainer. The retainer clips onto the header and provides a wire latch for robust retention, ideal for critical applications or applications subject to vibration and shock.

3M headers for CFast incorporate extended guide rails to help reduce the possibility of misalignment during card installations and grounding clips that provide additional retention force to the card, helping reduce the possibility of uncontrolled card removal from the connector when ejected. The single-row surface mount co-planar tails allow for higher yields and simplified inspection. The board mount headers are available in a low profile configuration or with optional 2 mm standoffs that allow the designer to populate the board underneath an inserted card. The product has been tested to comply with the CFast specification, providing 10,000 mating cycles to deliver high durability and long product life.

The latest generation flash device architecture developed by the CFA, a CFast card is a small cartridge that contains flash memory chips and incorporates SATA serial storage architecture and performance into a package similar in size to the existing CF cards, allowing for faster throughput, lower consumption of power, and hot-swap functionality. CFast is geared towards markets where performance and system downtime are major considerations. This includes the embedded computing, industrial, and network communications markets.