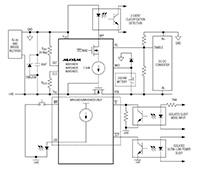 The MAX5982A/MAX5982B/MAX5982C support a 2-Event classification method as specified in the IEEE 802.3 at standard and provide a signal to indicate when probed by a Type 2 power sourcing equipment (PSE). The devices detect the presence of a wall adapter power source connection and allow a smooth switch over from the PoE power source to the wall power adapter.