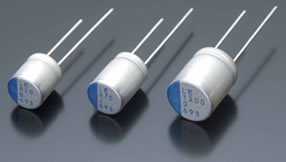 Nichicon has developed a number of series of Conductive Polymer Aluminum Electrolytic Capacitors. They are available in both SMD (surface mount) and TH (through hole) configurations.

Since the polymer is a solid, it also gives longer life, not following the classic Arrhenius formula. Instead of doubling life with every 10°C drop in temperature, the lifetime will be 10 times longer for every 20°C decrease in temperature.